Must one use a Menorah, or can he simply stick candles on a table?[1]

What material should a Menorah be built from?

Every person is to place effort into having a nice Menorah, in accordance to what he can afford.[5] The highest level of beauty is a gold Menorah. The second level is silver.[6] One who can afford it, is to place effort to use a silver menorah, as it is not so much of an expense.[7] One should avoid using an earthenware Menorah, as will be explained next.

Rabbi Avraham Azulaiy, in his magnum opus Chesed Leavraham, lists 15 levels of quality of vessels that can be used for the candle lighting. The higher it is on the list, the greater its quality for the Mitzvah.

Egg shells:[10] One should not use egg shells as a vessel to hold the oil for the sake of lighting Chanukah candles.

A belittling item:[11] One is not to use a denigrated item for the Chanukah candles, such as the peel of a lemon or onion, as this is considered belittling to the Mitzvah

The commonly depicted shape of the Menorah contains curved half circle branches, and is used for coinage, marketing, designs and sculpture art. The Rebbe[12], after a thorough Halachic and historic analyzation, concluded that this shape is in truth not the shape of the Temple Menorah, but of a cloned Menorah which was captured by the Romans, and placed on display in Rome to depict the fall of the Jews. The true shape of the Temple Menorah, from both a Halachic[13] and Historic perspective, contained diagonal branches. This is the shape of the Menorah which was depicted by the Rambam in his magnum opus Mishneh Torah, and was testified by his son, Rav Avraham, to be an exact depiction of the Temple Menorah. Due to the Rebbe’s discovery and revelation, artists commonly name this Menorah as the Chabad Menorah, although in truth this is the Menorah of all Jewry, as depicted by the Rambam. The Rebbe stated that one is to endeavor to use for Chanukah an eight branch Menorah which follows the true Temple shape, and not the half circle branches which depict a cloned Menorah which was used by the Roman’s as propaganda for crushing the Jewish pride and spirit.[14] [This however does not mean that everyone should use a Temple shaped Menorah, but that if they are buying a Menorah with branches, then the branches should be diagonal. However, Menorah’s that do not contain branches may also be used, and so was used by the Rebbe himself.[15]] 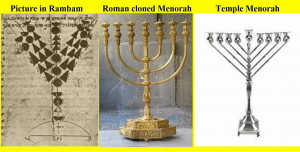 [2] Admur in the Siddur; See Chacham Tzevi 75; Shvus Yaakov 1:33; M”B 671:18; Shevet Halevi 8:157; Az Nidbaru 13:49; So is proven from all the Poskim who do not mention anywhere that a Menorah is needed, and furthermore some discuss whether one fulfills his obligation if he stuck a candle to the wall, and no mention at all is made over the fact that no Menorah was used.

Ruling of Admur in Siddur: Admur there writes: “The correct custom is to stick the candles or to place the Menorah by the width of the doorpost.” Thus, implying one fulfills his obligation of lighting the Chanukah candles, even if he does not use a vessel. So learns also Hiskashrus 385; and Siddur Admur of Rav Raskin.

[3] Chesed Leavraham Mayan 2 Nahar 58 lists 15 levels of vessels, and negates using shells of pomegranates and the like and concludes “These materials must be made into a vessel, and must be able to stand on their own without leaning, otherwise they are not fit to be used for Chanukah lights” [It is said that the source of the Chesed Leavraham is a hand-written letter by the son of the Ravad, Rabbi Yitzchak Sagi Nahor, who had received it from Eliyahu Hanavi, that a vessel is needed for the candle to be lit on.]; Avnei Neizer 500 based on Chesed Leavraham ibid [See however Igros Kodesh 27:46]; See Taamei Haminhagim 849; This is also hinted to in the Michaber who states we place the candles in from left to right and start lighting from the left, now if one does not have a Menorah what does it mean to start from the left. [Taamei Haminhagim 856]

[4] The reason: As the Menorah is considered part of the “Ner”, and one must light a Ner for Chanukah candles. [The Avnei Neizer 500 questions whether or not one must have a Menorah or a wick and fuel is enough. He says that this is dependent on whether the Menorah is considered part of the “Ner” or not. He concludes that based on the Chesed Leavraham ibid that one does not fulfill his obligation if a vessel is not used; See however Igros Kodesh 27:46, printed in Shulchan Menachem 3:271, who questions his conclusion] Other Poskim negate simply sticking candles on a table, as the Mitzvah in the Temple took place using a vessel. [See Taamei Haminhagim 849]

[7] Seder Hayom p. 98; Elya Raba 673:15; Birkeiy Yosef 673:7; Kitzur SH”A 139:5; Seemingly this does not contradict the statement brought earlier from the Chesed Leavraham that it is best to buy a gold Menorah as this is not as affordable as a silver Menorah and hence is not practical to write as a directive for the public. Vetzaruch Iyun

The Rebbe’s Menorah: There were years that the Rebbe lit candles using a simple Menorah that did not have branches or a back. [Hiskashrus 1010 footnote 12]

[13] Depiction of Menorah of Rambam brought in Pirush Hamishnayos and Hilchos Beis Habechira 3:10; Rav Avraham the son of Rambam on Parshas Teruma 25:32 “The six branches come out of the main branch in a diagonal, as my father depicted, and not in a half circle, as is depicted by others”; Rashi Teruma 25:32 “The branches are diagonal”; See Bechor Shur Rosh Hashanah 24 and Mishnas Chachamim Avoda Kochavim p. 64, brought in Pischeiy Teshuvah 141:14 who implies the Temple Menorah had diagonal branches