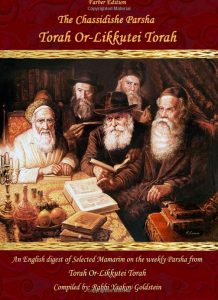 In honor of Yud Tes Kisleiv, shulchanaruchharav.com, is offering a 30% discount in its English Sefer on Torah Or-Likkutei Torah, using code yudtes30.

The following article was published today in the Daily Halacha podcast of shulchanaruchharav.com in honor of Yud Tes Kisleiv.

You can sign up to receive the daily Halacha of shulchanaruchharav.com, either through joining their mailing list, WhatsApp group, or podcast available on podbean, spotify, and Amazon music.

Learning the weekly Torah Or and Likkutei Torah:

Beli Neder: As by all times that one takes upon himself a new Shiur or learning schedule, one is to explicitly state that it is “Beli Neder.”[11] Thus, prior to resolving to have a set Seder to learn Torah or-Likkutei Torah, one should explicitly say [i.e. verbalize[12]] that he is doing so Beli Neder.[13]

Learning with one’s children:[16] The custom of some Chassidim is to study the weekly Chassidishe Parsha from Torah Or-Likkutei Torah together with their children, of bar mitzvah age, and even less than bar mitzvah. At the very least, it is to be learned on a superficial level.

Not to have it compromise on other learning sessions:[17] This new learning session is meant to come in addition to regular studies that one has already undertaken and not be learned instead of them.

The quality of its study and what to do if short on time: If one is time constricted, the Mamarim do not have to be learned in such great depth [Iyun], and it suffices to review them in a quick and light fashion [Girsa].[18] One can even simply read Likkutei Torah, even if he does not understand the full meaning of the words.[19] Nonetheless, one is to learn at least some section of the weekly portion properly, most preferably the first chapter.[20]

What to do if one cannot keep up with finishing it each week: Ideally, what is to finish the entire Torah Or Likkutei Torah of that Parsha by each corresponding week, and not delay it for another time.[21] Nonetheless, in the event that one is unable to keep up with finishing the weekly Torah Or-Likkutei Torah that corresponds to that weeks Parsha, then he should simply start from the beginning and study according to his pace [even though it will not be corresponding to the weekly Parsha] so he can finish it one time.[22]

Learning Likkutei Torah versus Likkutei Sichos-what had precedence? The Rebbe stated in a public talk on Simchas Torah in the year 1971 that he was going to stop publishing Likkutei Sichos for that year and one of the reasons is because he saw that the Chasidim were studying it instead of studying the works of Torah Or and Likkutei Torah, and that the intent of the Likkutei Sichos was to be in addition to the regular studies of Torah Or and Likkutei Torah and not instead of them. Accordingly, the Rebbe is encouraging the Hasidim to make the weekly study of the Chassidishe Parsha from Torah Or and Likkutei Torah of more importance than the study of Likkutei Sichos, and it should be secondary regarding the weekly learning for the Parsha. In the Rebbes words from that talk of: “I already discussed before that in the past the custom was that on Shabbos, they would learn Torah Or/Likkutei Torah, or other discourses relevant to that week’s portion. However, from the time that the Likkutei Sichos have been printed it has become the main subject of learning of the week as being that he is a Shpitz Chabad he claims that since it was printed that week this is a sign that this is the main subject of learning of the week and he thinks throughout the entire week that since he needs to learn the Likkutei Sichos therefore he is now exempt from learning Torah Or/Likkutei Torah… Therefore, since we are now beginning a new year from now on everyone should learn the discourses in Torah Or/Likkutei Torah and the other discourses that begin with verses of the weekly portion, and they should learn it in depth.”

Segula for Parnasa:[23] In the merit of learning the entire Torah Or and Likkutei Torah weekly, one receives the promise that his physical needs will be sweet and given at a good time. Mainly, it will bring blessing to one’s material abundance that it be used for healthy and happy purposes. Learning the weekly Torah Or/Likkutei Torah creates a vessel for the abundance of Parnasa, assists one to learn Torah without any stress or worry, and broadens one’s mind with understanding.

[3] See all sources in previous footnote; The first directive in this matter was given on Shabbos Mevarchim Teves in the year 1955. Ten years later, in 1965, the Rebbe came out once again with the same directives, although in a much more aggressive manner, mentioning it consistently throughout the talks of that year. In 1991 by the Sicha of Parshas Chayeh Sarah, by the Kinus Hashluchim, the Rebbe instructed the Chassidim to make a resolution to learn the entire Sefer Torah Or and Likkutei Torah, all their portions until the end.