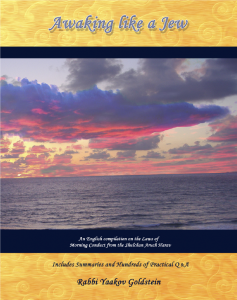 To purchase this Sefer, click here or on Amazon.com

E. Not to place on two pieces of clothing together:[1]

[According to Kabala[2]] one is to be careful[3] not to put on two pieces of clothing together[4], as doing so brings one to forgetfulness. [Thus, for example if one’s shirt is inside his coat, or his undergarment is inside his pants, he should not wear them together.]

[3] Admur Basra ibid; However, in Kama ibid the wording is “It is good to be careful”

[4] To note that in Kama ibid Admur adds the word “together simultaneously” while in Basra he just writes together.

[11] Piskeiy Teshuvos 2 footnote 13; However, Tzaruch Iyun from the law on Shabbos in which many Poskim rule it is permitted to wear this cover over one’s hat on Shabbos even in an area without an Eiruv being that it is considered like a clothing. [See Minchas Yitzchak 3:26; Sheivet Halevy 1:61; Rashdam 4; Chelkas Yaakov 2:6]

[16] Piskeiy Teshuvos 2:3 based on Ashel Avraham Butchach 2; Vetzaruch Iyun as the allowance of the Ashel Avraham is based on the fact that one of the clothing is a minority of the other clothing, as understands Miaseif Lechol Hamachanos 2:12, and hence if the two clothing are the same size, such as two socks, or two sleeves, how would this allowance apply according to the Ashel Avraham.

Other Poskim: Some Poskim are stringent in the above matter. [Yayin Tov 11; Rivivos Efraim 1:4]